Balkanization Isn’t the Answer: If We Lose the Union, We Lose Everything.

Calls from fringe activists and politicians of both sides of the political aisle have always echoed the rhetorical punchline of secession. Ultra-conservative Republican politicians have appealed to the secessionist undercurrents of the American South and Midwest, and Democrats have occasionally appealed to similar passions brewing on the East and West coasts.

While the topic of secession is typically brought up every couple of years, and is usually regarded as a political afterthought, the ideological and political polarization that currently rips and tears at our nation’s socio-cultural fabric has made the possibility of secession worryingly popular.

According to a recent poll by YouGov and Bright Line Watch, the amount of people supporting the partitioning of the United States into several different unions has increased significantly. 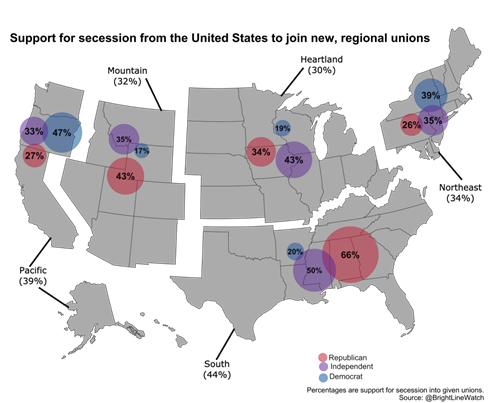 A poll such as this, while the amount of weight it holds is debatable, is still incredibly disheartening. The current public opinion in all of these regions, as indicated by the poll, highlights not just a usual partisan divide between Republicans and Democrats, but of a deeper socio-cultural chasm that seems to be getting wider by the day.

Shortly after then president-elect Joe Biden had won the 2020 election, one Mississippi state lawmaker proposed the “Magnolia State”, in which the state of Mississippi would secede from the Union and form its own country.

In Florida, Orlando Sentinel reported that the treasurer for the Lake County Republican Executive Committee wrote that the nation was “at war” and branded Republicans who don’t believe former president Trump won the election as “traitorous.” The Lake GOP second vice-chair also called the election “illegitimate” and made outlandish claims about Antifa being solely behind the January 6 attack on the U.S. Capitol building. To top it all off, this month the Hillsborough GOP chair refused to accept that Donald Trump had lost the election, and that a group of radicalized Trump supporters were behind the attack.

However, Republicans aren’t the only ones guilty of spouting divisive secessionist rhetoric. On September 25, 2020, Lanny Davis, a long-time Clinton confidant, took to Twitter and yammered on about blue states leaving the Union to form their own country:

In addition, Breitbart reported on September 29, 2020, that in an interview conducted by Jessica Suriano with Richard Kreitner, author of Break it Up: Secession, Division, and the Secret History of America’s Imperfect Union, focuses on the idea that secession shouldn’t be tarnished by slavery. Abolitionists, Kreitner argues, also considered seceding from the Union, and with the presidency of Donald Trump, progressives should consider it today.

The interview was published in the left-wing magazine The Nation and can be read in its entirety here.

All secession rhetoric, whether it is spewed by angry Republicans having a meltdown over Trump’s failed 2020 re-election bid, or radical progressives frothing at the mouth in their zealous effort to bring about their long-awaited Utopia, is deeply indicative of two already vastly different Americas, figuratively speaking.

I’m not going to pretend that I have the end all be all answer to America’s newfound socio-political struggle, as it is unlikely that anyone currently has the solution. What I do know, however, is that the United States, historically speaking, has been through much worse.

A bloody civil war between North and South, the Great Depression, two world wars, the gruesome socio-political turmoil of the Vietnam War, the September 11 terrorist attacks, and the Great Recession are just America’s most notable calamities in recent history. Many Americans tend to forget that our national capital was set ablaze by British invaders during the War of 1812 – the then newly formed federal government had only been in operation for a little over two decades, and James Madison was only the fourth American to ever hold the office of President. It’s a miracle that such an event didn’t ruin the resolve of the delicate federal government and plunge the nation into chaos.

The potential for the United States to dissolve out of cultural disagreements is a testament to the eerie reality that America is truly a country that can only be ruled by Americans but can also only be destroyed by Americans. The United States is a great continental power that spans from the East Coast of North America to the West Coast. It is the strongest military power on Earth and borders two non-threatening, peaceful neighbors, them being Canada to the North and Mexico to the South. Spanning over 3,000 miles across, a foreign invasion of the mainland United States is virtually impossible.

One of the great reasons why the United States has been able to not only survive, but thrive, is due to it enjoying a particularly advantageous and rare geography. But the fracturing of our Union would change all of that. Suddenly, you would have at least two – maybe more – smaller unions staking their claim to their respective part of the continent, making violent struggles and conflicts much more likely.

In addition, smaller unions would be weaker individually to counter the potential threats of foreign powers, such as China or Russia, who may look to pray upon the now fractured, former United States. Whether the new unions would temporarily band together, as a sort of loose confederation to counter foreign threats is uncertain, especially when the cultural and social differences between those unions (them being the main factor driving this national divorce to begin with) are so different.

Would a group of truly disunited states be able to hold their own without the unified economic, political, and military might of a once dominant continental power? Perhaps they would, or perhaps they wouldn’t. Either way, I am of the optimistic belief that the United States can still be delivered from the social and cultural regression that we have seen. Part of that effort, however, also means conservatives not retreating into pessimistic political rabbit holes about the doomsday-like “fall of the United States” scenarios.

Decent people do still exist in the United States – people who have very little patience for the authoritarian undertones of the far-left. Those are the people conservatives ought to be reaching out to in order to further the movement. But having a better outreach also means putting forward candidates who are actually willing to fight for conservative ideas and principles in Congress and state legislatures and local municipal councils. It means presenting the conservative case to Americans clearly and honestly, no more screaming late-night Fox News hosts. The fight is far from over, and though it is all far easier said than done, the prospects of a truly great Union aren’t dead either.