Living in the Stanford Prison Experiment 2021: the Age of Obedience & Manipulation

Now, our eyes are glued to screens, watching for the latest update, changes to mask guidance, and permission to operate as normal, free citizens. We’re entering the phase of labels and deindividuation: Vaxxed and unvaxxed. 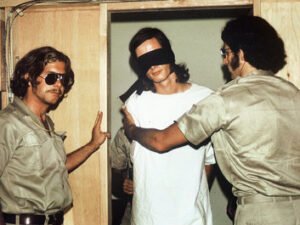 If you ever took an introductory psychology class in high school or college, chances are you were introduced to the Stanford Prison Experiment. In this study, Dr. Philip Zimbardo aimed to examine the effects of labels, social rules, and behavior. To do this, he recruited twenty-four male participants and divided the group equally into “guards” and “prisoners.”

In these roles, both groups were expected to be treated as their role and behave within the constraints of that role. Guards had power and authority while prisoners, despite it only being a role, accepted their rule and submitted to their pretend jail cells.

It didn’t take long for the guards to push the boundaries, further subjecting the prisoners to humiliation, harsh punishments, and borderline torture. They’d make rules, change them, use physical labor, gaslight the men, play with their emotions, etc.

Prisoners responded by staging a rebellion which they were later punished for. Meanwhile, guards offered special privileges for those not involved in the rebellion, which further divided the prisoners. The subsequent division led to prisoners trying to win the favor of the guards by telling on fellow prisoners.

Does any of this sound familiar? It should. Because for over a year, the world has been living through the same manipulative measures at the hands of their governments. Whether it’s changing CDC guidelines, shaming citizens, bribing the population, encouraging neighbors to turn on one another, these actions mirror the ones enacted in that tiny Stanford basement in 1973. Fauci has become the ultimate prison guard with other notable figures following suit.

Democrat governors might as well have donned the guards’ sunglasses too because they’re demonstrating the same lack of compassion and self-serving attitude: “Stay in your homes. I have a dinner party this weekend.” Our homes have become the prison cells and the guards want to be sure we stay in them. Look at Australia. Police are patrolling and arresting people for being outside because of an “outbreak” which has resulted in ten deaths. Citizens are being dragged away from parks in handcuffs while others are being ordered into their homes by helicopters.

Meanwhile, the world and its masses have reacted to harsh restrictions and the talk of vaccine passports accordingly (and rightly so). Look at the emotional toll we’ve experienced and now we face the dehumanization of those that do not wish to accept the vaccine, which is a highly personal medical choice. Protests are a justified response to the extreme measures being put in place. People are angry. They are horrified.

And yet, here we are, still in the middle of the largest prison experiment we’ve ever experienced in our lifetime. However, some have accepted their roles as political prisoners, bowing down to the guidance and arbitrary rules, much to the delight of our self-appointed guards. In the experiment, maybe they would have been the ones trying to win over the guards, a feeble attempt to improve their situation.

Zimbardo, however misguided, embarked on his study to test the power of social rules and the influence of authority. While not ethical by today’s standards, his findings had widespread implications to examine the way people react to power, authority, environment, shame, and coercion.

None of these restrictions were fathomable before 2020. No one was begging for the government to tell us when we could leave our houses, get married, attend funerals, go on dates, amongst many others. Now, our eyes are glued to screens, watching for the latest update, changes to mask guidance, and permission to operate as normal, free citizens. We’re entering the phase of labels and deindividuation: Vaxxed and unvaxxed. It’s another divide that our guards can use to mold our behavior and continue ruthless power grabs.

Zimbardo ended his experiment when he saw the devastating toll the conditions were taking on the prisoners and the extreme acts of sadism from the guards. The only problem is, there isn’t anyone pulling the plug for us, the unwilling participants.

Breanna is a contributor at American Pigeon and The Liberty Loft.
All Posts

PrevPreviousBalkanization Isn’t the Answer: If We Lose the Union, We Lose Everything.
NextIranian Regime Kidnaps Elderly California ResidentNext