A survey conducted by College Pulse’s Future of Politics showed a growing political divide between men and women in college. The survey interviewed over 1500 undergraduate students and found that 84% are currently registered to vote, an increase from the 69% in 2016 and and 80% in 2020. Three-quarters of the reportedly believe that that the country is headed in the wrong direction and that they are “motivated to do something about it.”

Both sexes also reportedly say that they cannot imagine switching parties within the next ten years. For those who are not Republic or Democrat, most women say they see the possibility of becoming Democrat and most men say they think more about becoming Republican. Although more men in university reportedly vote at higher rates than women, more women enroll in college, resulting in more women voters throughout universities.

In a Newsweek article, Samuel J. Abrams and Jeremi Suri write that the survey shows that men and women are experiencing college differently.

“Men seem to be moving to the Right in reaction to what they perceive as “attacks” on their status from women, while women seem to be expressing ever greater frustration with what they interpret as habitual male behavior surrounding college athletics, party culture, and other traditional facets of campus life. College women, like many other American women, are also motivated by what they see as restrictions on their reproductive and other freedoms.”

The good news, they continue, is that a third of college men and women identify as “independent” or “unaffiliated,” which suggests that they are swing voters. Data that shows that “Generation Z” is ideologically homeless. The authors argue that since there is a clear middle ground, universities are being offered the opportunity to reverse the course of deepening political polarization between young men and women by leaning to the middle. 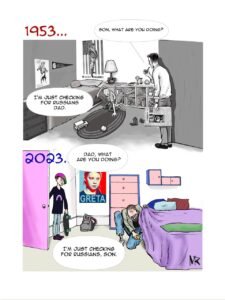