As mainstream outlets like CNN push for unvaccinated people to be denied entry into supermarkets and ball games, like Don Lemon suggested, or that they should be denied the same pre-pandemic normalities as vaccinated individuals, as per Dr. Leana Wen, we’re seeing an increasingly segregated U.S. as unvaccinated individuals are treated like Second Class citizens. Unfortunately, that treatment is also beginning to extend into medical care.

“Do no harm.” The phrase is synonymous with physicians and healthcare workers. Their mission is to help the sick, care for the injured, and respect the wishes of their patients.

But what happens when personal, or rather, political, biases put a wedge between professional obligations and the patient in front of them? Certainly, these heroes we’ve bolstered for the last year are burnt out. They’ve been working long hours, many of which were in the early days of the — “illness.” However, if you’ve dipped your toes into the social media waters lately, you likely found something more vindictive.

Aside from the usual mask and jab propaganda, we now have post after post from nurses and doctors wishing illness and death to those who will not take the jab. Here, a nurse practitioner at an addiction treatment center proposes that vaccinated patients should be given priority over non vaccinated.

What she doesn’t contend with, however, are the potential side effects of the vaccine, as well as long-term studies (which do not exist) of the vaccine. In the first postmortem study done, an elderly man, after his first dose, was hospitalized and contracted COVID-19 from another patient, whereupon that man died. Viral RNA was found spread across his organs, which may have amplified the spread of the virus.

But this isn’t the only instance of medical prejudice. There are also reports of a man being taken off of the transplant list after denying the jab. Social media ramblings and death wishes aside, shouldn’t we be alarmed that the medical professionals are wishing harm on the patients they pledged to care for?

And where was their virtue signaling when they administered Narcan to the same person for the third time? Or when a patient with heart disease continued to eat fried food? Those are both health risks with identifiable behaviors to avoid. Yet, they treat those patients with kindness and compassion.

The medical professionals turning their backs on populations just because of a personal choice conveys two important messages, whether they’re aware of it or not. First, the social credit system is here in the United States. While in its infancy, we can see its effect on how unvaccinated and unmasked individuals are being treated by society.

The unvaccinated are being denied admission to businesses, medical care, and there are discussions of pay cuts for those that refuse the shot. Recently, Representative Ritchie Torres (D-NY-15) introduced bill H. R. 4980 which seeks to enforce mandatory vaccinations for citizens traveling domestically on flight by banning flight for the unvaccinated. President Biden back in February also wanted to ban travel to red states over false claims that the mortality rate is higher. In the last six months, overall deaths between states like New York, Texas, California and Florida are all similar with California and New York being the two highest.

In addition to these, a pregnant woman was also denied medical care from her cardiologist because she was unvaccinated, despite the science that suggests the spike protein may attach itself to women’s uterus’, according to Dr. Byram Bridle. The CDC also admits that vaccines contain the spike protein.

The early 20th century showed us the consequences of  using prejudice, scapegoating, and discrimination. Today, we are seeing the pharmaceutical industrial complex do the same.

But the hypocritical “take your shot” virtue signaling doesn’t stop there. It also begs the age-old question, is healthcare a basic human right? The Left has always argued that it is while advocating for universal healthcare. However, the jab seems to have changed their tune because, with treating the unvaccinated, it’s “crickets” for some. 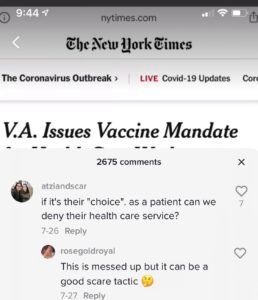 Breanna is a contributor at American Pigeon and The Liberty Loft.
All Posts