The Racial Motive Bias: How Mass Shootings Only Matter if the Murderer is White

Over the last two weeks, two mass shootings occurred in which 18 people were murdered. Eight in the Atlanta shooting, and 10 in the Boulding, Colorado shooting. Immediately, race became a motivating factor.

On Monday, March 22nd, a man shot up a supermarket, King Sooper, in Boulder. He has since been identified as Ahmad Al Issa, an immigrant from Syria.

He murdered 10 people, including a police officer who had been one of the first to arrive at the scene. He now faces 10 first degree murder charges.

His search history included multiple references to the Phoenix, Arizona death of Muhammad Muhaymin Jr. who was seen and heard calling out ‘I can’t breathe, please Allah’ on body cam.

His father posted where he discusses “revenge” and his support of the Erdogan regime in Turkey, among other alarming things.

Al Issa had also posted multiple anti-Trump posts. He was a Washington Post reader, and shared their hatred for Trump.

According to a White House official, early information from a national security agency suggests that Al Issa had planned to target the Trump rally in Colorado Springs in Feb 2020, but decided to wait until the next one on March 13 in Denver, but it had been cancelled due to Covid.

Early information from a national security agency suggests Boulder shooter planned to target the Trump rally in Colorado Springs, Feb 2020, but decided to wait until the next one on March 13 in Denver but it was cancelled due to COVID, per WH official

The Colorado GOP headquarters was also scoped out, as were a few churches.

As the NYT reported, Al Issa bought his rifle a week before the shooting despite being previously known to the FBI.

As of now there isn’t a definite motive for the attack. However, King Soopers labels itself as “Your one-stop shop for Kosher groceries”, due to their large Kosher section. The city of Boulder has a large Jewish population, and this is the time of year that they go shopping for Passover. It is also the time of year that Christians shop for Easter.

Could this be the motive for the attack? Surely, the shooter must’ve known the religious background of those that shopped at this market. And if he didn’t, perhaps it doesn’t even matter. If the perpetrator is white, apparently, it’s always a terrorist attack with a racial motive due to white supremacy. And if the victims are white, well then, we’d better hope the perpetrator is white too. Because if he isn’t, we might not even hear about it.

On the day of, and on the day after the shooting, many on the Left were posting that the shooter was a white male because, “white males do shootings”, or that he must be white because “police didn’t kill him”….

The Double Standard; Why not misogyny? 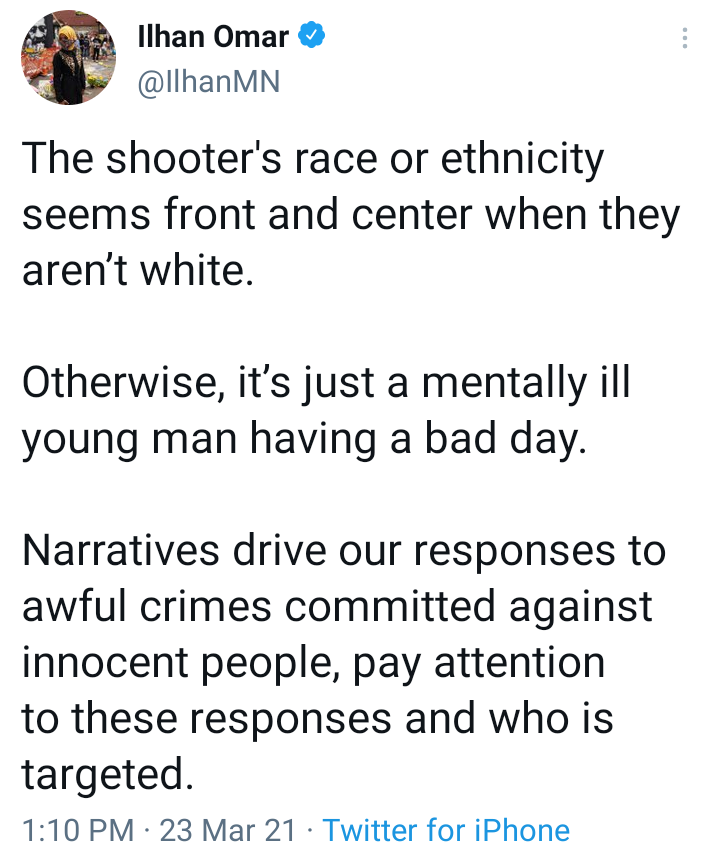 As tweeted by Ilhan Omar and others, when it’s a white male, then the Right will make excuses about the person being “just a mentally ill young man having a bad day”.

This would seem logical if being a radical did not have anything to do with the shooting; conversely, it would seem logical to call the Atlanta shooting a hate crime if there was evidence that it was racially motivated. In other words, the left will use racial identity as a basis of fact, where no evidence of racial motive is found, while simultaneously ignoring evidenced-bases of hate crimes, dismissing them as anomalies when their preferred narrative is proven false.

Omar even admits “pay attention to these responses and who is targeted.”

One interesting question, is why, in the Atlanta shooting in which 8 people were killed at massage parlors, many who were Asian women, the media didn’t cover this as a misogynistic crime. It seems that in a shooting that left women dead, whereby a shooter claims to have had a sexual addiction and no longer wanted to be tempted by massage parlors, presumably toward women, misogyny has been completely bypassed in the attempt to elevate Asians as oppressed.

Even after it came out that Al Issa was Syrian and not actually white, Twitter spread misinformation about the shooter being white. 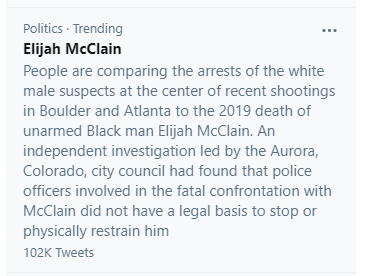 As soon as the shooter was identified to be Ahmad Al Issa the media became silent. Some corrections were issued, but not apologizing for the mistake, only justifying the initial assumption that the shooter was white.

I deleted a previous tweet about the suspect in the Boulder shooting. I made an assumption based on his being taken into custody alive and the fact that the majority of mass shootings in the U.S. are carried out by white men.

If our politics are to be bathed in racialist outlooks, with preferences for some races over others, then be not surprised when individuals, who are of the race of one’s own preferential narrative, are showed to be equally as deranged enough to kill.

The truth is, mass shootings have many motivations. Racism is one such motivation. As are politics and nihilism. When we refuse to look at evidentiary intent and look solely at the race of victims and the race of the perpetrator as a primary lens, we become racialists.

Using these instances as reason to confirm pre-existing biases is child’s play. But whether these tragedies are used as political motivations to credit the narrative of white supremacy or used in the power struggle to confiscate all weapons from the hands of law-abiding citizens, there is something very clear: the media treats mass shootings, and crime generally, very differently and sometimes, the crime isn’t reported at all.

Yaakov Strasberg is the Chief Political Correspondent for American Pigeon.
All Posts

Login or Register
PrevPrevious“The World is Laughing at us”; A Breakdown of World Leaders Throwing Shade
NextNY Approves Vaccination Passports: Give us Your Papers, or ElseNext