Project Veritas released a video today in which Twitter CEO Jack Dorsey called for more censorship against Conservatives and Trump supporters. Dorsey says that censoring Trump is just the beginning.

“We are focused on one account (@realDonaldTrump) right now, but this is going to be much bigger than just one account, and it’s going to go on for much longer than just this day, this week, and the next few weeks, and go on beyond the inauguration,” he said. 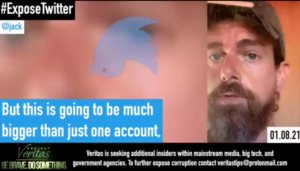 “So, the focus is certainly on this account (@realDonaldTrump) and how it ties to real world violence. But also, we need to think much longer term around how these dynamics play out over time. I don’t believe this is going away anytime soon.”

Not long after posting the video Twitter labeled it as “Sensitive Content” which shows that Twitter doesn’t want people seeing it for obvious reasons, further proving it to be true.

A Twitter insider recorded the video and sent it to Project Veritas. https://youtu.be/ZFhHg8QXTE8

This comes after Twitter banned and suspended over 70,000 accounts including President Trump’s and the accounts of multiple other high profile Conservatives. Twitter has also been removing thousands of followers from Conservative accounts which are still active.

Yesterday, Dorsey tweeted that he regrets having to ban Trump, but he had no choice since Trump was inciting violence. (Trump had actually called for peace.) This video from Project Veritas has completely debunked his claims.

PrevPreviousIn, Not Of- Woke or Weightless? Why Your Lawn Sign is Stupid. Ep 3
NextCancel Student DebtNext