The current administration shifts America-first domestic production to a heavy reliance on foreign markets. The effects have been clearly observed with the shift from domestic to OPEC oil production. It can also be observed with issues in the supply chain that have been created by an inconsistency of policy between the previous and current presidential administrations.

Experts argue that a reliance on foreign markets opens the United States up to oppressive interventionism.

Beijing and its cooperative partner regimes are on record using the power of interventionist politics, along with pressure campaigns, against neighboring nations. These policies are used to boost economic incentives abroad.

As Seen In Iran

Beijing’s aggressive energy industry commits eco-terrorism in OPEC-producer states. This raises the stakes of Western dependence on OPEC, experts warn. Eco-terrorism is the act of exploiting another country’s ecosystem to the point of destroying it.

“China is killing natural resources in Iran like there is no tomorrow to it,” Kian said.

Kian explained that Beijing purchases or rents land reserves from Tehran’s regime leadership. He notes that the Ayatollah’s government allows Beijing to exploit Iran’s natural resources because it gives them political advantages.

Kian called out the Tehran regime leadership’s relationship with China as an “embarrassing one,” steered more by political prestige points than actual advantages to Iran as a nation. He described harsh land abuses that fit the criteria of eco-terrorism.

Examples of this include China’s cooperation with the IRGC to drain the Huralazim wetland in Khuzestan province to reach its oil deposits.

Beijing’s project in Khuzestan had a severe impact on the local environment. This sparked the Summer 2021 domestic protests against the Iranian regime all across the country. Despite the regime’s brutal response to protests, Iranians in the energy and gas industry continue to take to street protests around the country.

Political pressures from this Sino-Iranian relationship put a severe strain on OPEC states to cater to Beijing.

This, in turn, increases political risks to Western countries that continue to adopt an OPEC-dependent energy policy. Western energy trade professionals have voiced concern about Biden’s gravitation toward OPEC rather than domestic energy production.

“The only conclusion I can arrive at as to why the Biden administration would undermine its own energy in favor of foreign industry is that they are beholden to the radical, green energy backers of the Biden campaign,” said Behrens.

Behrens said that the Chinese regime is a major investor in green energy prospects, particularly solar panel energy. He estimated that 9 out of 10 of the major world solar energy panel producers are either made in China or produced by companies owned by China.

A focus on foreign-first energy policy gives policy advantages to the Chinese regime, which, as Kian noted, is already heavily pursuing interventionist and market control measures in the OPEC bloc.

“It’s a way-of-life risk,” Larry Behrens said, noting that everything from cars, to product delivery, to electricity depends on energy trade. The foreign-first policy puts energy production into the hands of foreign entities that do not have the U.S. best interests in mind.

“America needs an America-first policy for protecting industries that are critical for our way of life,” Behrens said. He pointed out recent Biden administration policies that will not be good for domestic energy. Rather, Behrens states that recent policy is shifting market activity into foreign markets.

This shift of sourcing puts the demands on the OPEC states, which have come under the heavy influence of Beijing’s increasingly aggressive energy production. The West is rendered vulnerable by policies that push its energy production into the volatile theater of the Shanghai Pact nations.

Yet, American policy splits on U.S. fossil fuel dependence and how policy should proceed. Domestic clean energy advocates stress the need for renewable resources as a way to guarantee domestic energy security.

“Our nation’s continued reliance on fossil fuels leaves us vulnerable to the gyrations of global oil markets and foreign actors,” said Gregory Whetstone, the President, and CEO of the American Council on Renewable Energy.

“This is one reason that Americans across the political spectrum want to accelerate the transition to clean, affordable, and homegrown renewable power,” Whetstone said.

Behrens used the recent motion denial of a permit to Alaska’s controversial Pebble Mine as an example. Pebble Mine, on track to be one of the world’s largest copper and gold mines, was denied a permit it needed to operate. This, The New York Times writes, likely “killed” the project.

He noted that the Pebbles Mine was set to be an important domestic resource for copper and that the Biden administration’s move to close it in favor of fewer carbon emissions was a favor to foreign-first markets.

This is a notable departure from the Trump era which was described as “neo-mercantilist” by energy trade experts for its strong affinity to exports, and putting America’s domestic production first. Researcher Farid Guliyev writes in his assessment of the Trump-era American energy market a transition in energy production he refers to as “the shale revolution.”

During this era, the Trump administration’s policies in energy production had set the U.S. course to go “from a net energy importer into a global energy superpower.”

Some argue that U.S. energy needs to be a “green leader” so as to retain its credibility as a green energy advocate. This does not fully address that the United States was already on course to be the leading producer of energy due to the new domestic-centered interests of the previous administration. The argument that the U.S. must walk back from its protectionist trade and reenter climate agreements to be an effective leader does not appear to reflect the real statistics.

During the shale revolution, U.S. renewable energies were also gaining, and policy experts argued that a push for U.S. climate-change investment and lead energy investment could coincide. While partisanship regarding clean energy was polarized, the market appeared to prioritize the idea of better, renewable energy creation (see Pew Research).

An apparent regression focus from domestic-first to foreign-first energy trade appears to be counterproductive to U.S. trade progress.

Brooks is a foreign affairs editor/reporter for American Pigeon. She covers world policy, American interests, and security issues. She has been a contributing reporter with publications such as The Modern Treatise and The Epoch Times.
All Posts

PrevPreviousPrudence, in the Face of Light or Transient Causes: Misinterpretations of the Declaration of Independence
NextThe Star Wars Sequels Had its MomentsNext 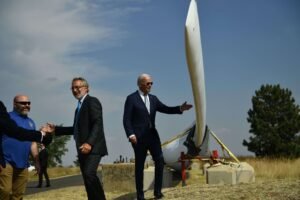 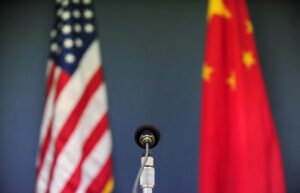 ‘A Highly Orchestrated Propaganda Operation’: How the U.S. is Becoming China’s Puppet Nation