Conservative Activist Heads to Wyoming to Primary Disgraced Warmonger Representative: “This is our party, not yours.”

Conservative activist Scott Presler is traveling to the Cowboy State of Wyoming to teach volunteers how to organize on a local level. He aims to replace disgraced Rep. Liz Cheney (R-WY).

“Rep. Cheney betrayed her constituents when she voted to impeach President Trump” Presler said. “When she isn’t pushing for endless wars or spreading debunked New York Times propaganda, Cheney consistently turns her back on the very people who elected her.”

Over the past few years, Presler has traveled the country organizing events and registering voters. He has trained volunteers and spearheaded grassroots efforts to spread conservatism. He leads cleanups in cities such as Philadelphia, Baltimore, and New York.

He does what the GOP doesn’t do.

At this time he’s not endorsing any candidates to replace Cheney. He’s “coming to Wyoming to train the grassroots on how to register voters, community organize, and prepare for the primary next year.”

“I’m a Virginian traveling to Wyoming to send the warmonger representative back to Virginia. She’ll fit in right at home with her D.C. elitist swamp dwellers,” said Presler about Cheney.

This coming Saturday (April 24th) he will be hosting a candidate recruitment class in Cheyenne, Wyoming. 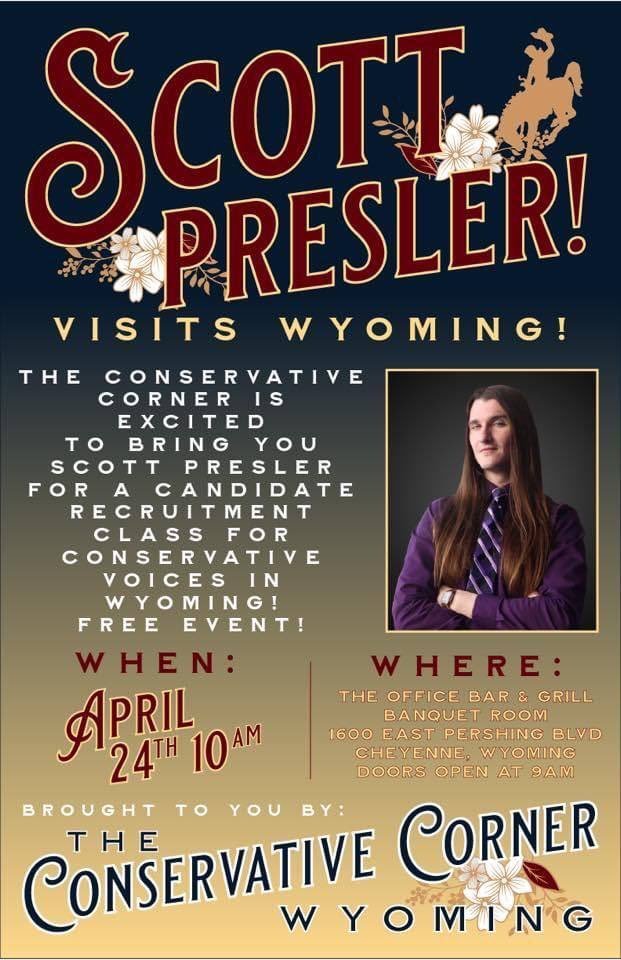 This is one of several events that he plans on hosting to replace Cheney for someone who will represent the will of their voters.

He plans on replacing multiple other politicians including Republican Governor of Georgia Brian Kemp, and Georgia Secretary of State Brad Raffensperger who, it turns out, was given $5.6 million in donations from a Mark Zuckerberg linked group.

Scott is not funded by the GOP in any way, and he does everything on his own initiative.

When asked what motivates him to do what he does, he replied that “there has been no guidance or leadership from the Republican Party and I feel a responsibility to help guide our party going into 2022. Joe Biden recently said that no amendment to the Constitution is absolute— this is a direct threat and danger to our freedoms. Even if I’m unsuccessful, I want to remember that I took action and that I fought for what is right.”

His message to the establishment is: “This is our party, not yours. You work for us, not the other way around. You have to earn our votes, not expect our loyalty. I make a commitment that I’ll do everything within my power to defeat America Last politicians, on both the Democrat and Republican side, and replace them with America First Conservatives.”

PrevPreviousFauci Frustrated when asked “When do Americans Get Their Freedoms Back?” (VIDEO)
NextDOJ and Establishment Media Lied about Jan. 6 Officer DeathNext