On Friday, newly-hired Baylor University professor, Stephen Goniprow, was unexpectedly barred from teaching his introductory class, “The U.S. Constitution, it’s interpretation, and the American political experience,” for refusing to wear a mask while lecturing.

The surprising news came when Professor Goniprow sent out an email to his students after he had previously said that the Baylor administration had permitted the return of in-person lectures: 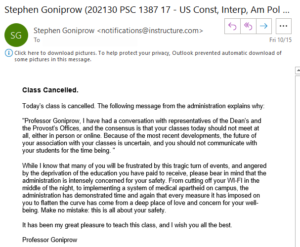 According to the email, Goniprow has been experiencing some turbulence from his new employers, directly quoting from an email he received from the Baylor administration: “Because of the most recent developments, the future of your association with your classes is uncertain, and you should not communicate with your students for the time being.”

In addition, Goniprow appears to mock the Baylor administration with sarcasm regarding the school’s supposed intention of keeping students safe with mask mandates.

A faculty member from Baylor’s Political Science department sent out an additional email clarifying that Professor Goniprow will no longer be teaching the class as of Monday, October 18. Additional details regarding Goniprow’s future employment at Baylor University remain unknown. 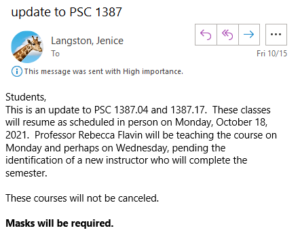 The controversy originally began when Goniprow originally refused to wear a mask in at least one of his in-person lectures and used his class time to voice his personal opinions about Baylor’s mask mandate on campus, the Baylor Lariat reported.

The Lariat also published a recording of one of Goniprow’s virtual lectures on YouTube, in which he used class time to talk about Baylor University President Linda Livingstone’s “presidential perspective” email, where the furthered continuation of Baylor’s mask mandate was announced.

Throughout the lecture, Goniprow also flirted with the notion that there was no scientific evidence to suggest that masks help to stop the spread of COVID-19, citing the supposed lack of “randomized clinical trials”. A student in the class then called out to Goniprow during his lecture, stating that there was, in fact, scientific evidence in support of the effectiveness of masks. Goniprow promptly told the student to be quiet during his lecture.

The controversy has since provoked an array of mixed reactions from Baylor students, with some being in favor of Goniprow’s class being moved to a virtual environment, and others showing support for the professor’s persistence, the Lariat reported.

American Pigeon reached out to Mr. Goniprow for a comment, but has received no response since our additional inquiry.